‘He did go away, you know’! UK Supreme Court rules failure to comply with legal requirement renders detention unlawful 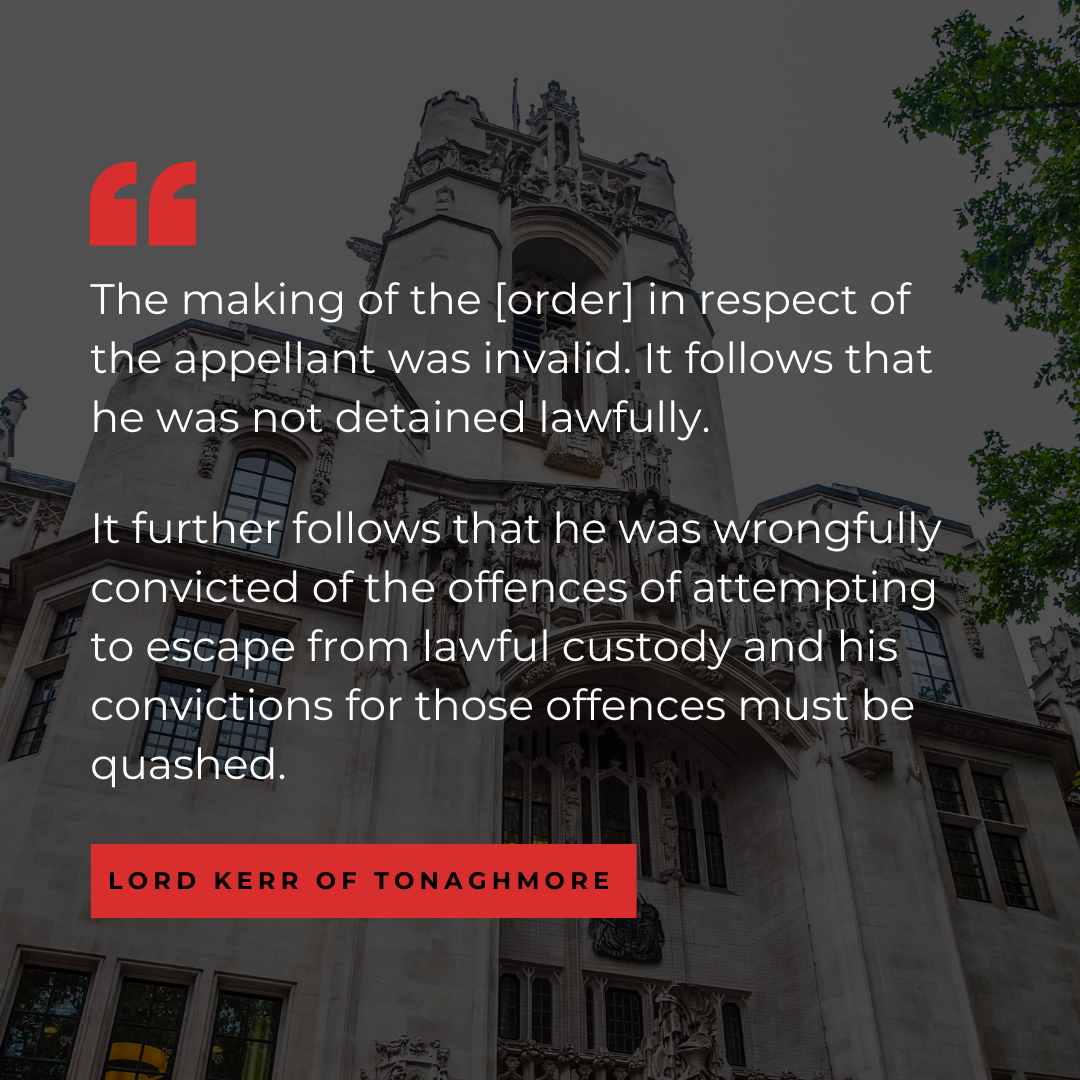 Detention without trial, or internment, was commonplace in various guises since the inception of Northern Ireland in 1922.

The Appellant had been interned in 1973 on suspicion of involvement in terrorism and was subsequently convicted, in 1975, of two attempts to escape from lawful custody and sentenced to a total of four and a half years imprisonment.

It transpired that his initial detention had not followed the letter of the law in that the decision had not been personally made by the Secretary of State.

The Detention of Terrorists (Northern Ireland) Order 1972 provided at Article 4(1):

Where it appears to the Secretary of State that a person is suspected of having been concerned in the commission or attempted commission of any act of terrorism or in the direction, organisation or training of persons for the purpose of terrorism the Secretary of State may make an order (hereafter in this Order referred to as an ‘interim custody order’) for the temporary detention of that person.

Such a person would then be taken into custody for an initial period of 28 days after which they would be released unless the matter was referred to a commissioner by the Chief Constable. Their detention would then continue until such times as it was considered by a commissioner who would either (a) make a detention order or (b) order their release.

In 1974, Brian Hutton QC (later Lord Hutton of Bresagh) provided an opinion to the Attorney General in which he concluded that:

…a court would probably hold that it would be condition precedent to the making of an [interim custody order] that the Secretary of State should have considered the matter personally.

Counsel’s Opinion was released in 2009 under the 30-year-rule.

The Respondent relied upon the principle that duties imposed on ministers and their powers are normally exercised under their authority by civil servants.

The Supreme Court’s construction of the 1972 Order, however, required that the interim custody order be personal to the Secretary of State thus distinguishing this principle.

The making of the [interim custody order] in respect of the appellant was invalid. It follows that he was not detained lawfully. It further follows that he was wrongfully convicted of the offences of attempting to escape from lawful custody and his convictions for those offences must be quashed.

Some commentators have dismissed this outcome as being something of a legal technicality. To do so is to dismiss the rule of law, itself defined by its technicalities.

It is not yet known just how many internees will have had similar issues with their detention nor the extent of their claims for false imprisonment but, as Viscount Sankey LC stated in Woolmington v DPP (1935):

That golden thread hasn’t gone away, you know.